Margaret moved from Tewantin into Noosa Waters Retirement Village in August 2000. The village was brand new, the concrete driveways had yet to be built, and Community Centre and pool would only be built along with the first 12 villas. Margaret moved in with her little dog, and tells the story of taking her dog for a walk one evening when the village gates had just bee installed. A delay meant that on her return, she realised the gates had locked and she hadn’t brought her keys to get in. Margaret has always been a very smart and resourceful lady, and when she saw the large entry gates had a series of decorative circles in the middle, she knew just what to do. She slid her body through the larger middle one and then pulled her little dog up and lifted him through. Noosa Waters Retirement Village Manager Leigh Kersnovske said Margaret is still likely to fit through that gate, given she’s still very active despite her upcoming 100th birthday in November!

Margaret and the original group of residents – Alex Millar and Colin and Evelyn Smith – formed the first Residents Committee and created the constitution. At some point in her absence, she was voted in as the Treasurer, something she still finds funny as she says she’s the worst at figures. At least back then the budget was very simple and they all muddled through together.

Margaret has witnessed many changes in the village over the two decades she’s lived at Noosa Waters Retirement Village and has watched the coming and goings of residents over the years. There are still quite a few of the original 12 living here – Margaret says there must be something in the water. Margaret says she is happy to have moved to Noosa Waters Retirement Village and has no regrets, enjoying being involved in the community socially and playing cards on a Saturday.

Everyone at SCCQ is looking forward to Margaret’s 100th birthday in November and hope we are able to celebrate in style. 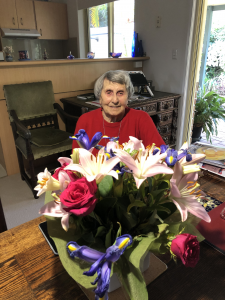 All News
Next Article