Stan’s the man for living his best life

Almost a year ago, 94 year-old Stan suffered a nasty fall, after climbing up a ladder to pick bananas at his Golden Beach home, and was admitted to Southern Cross Care (SCCQ) Caloundra on an ambulance trolley.

Flash-forward a year on, and Stan has made a full recovery, triumphantly walking out of the Little Mountain residence, flanked by the supportive and proud care team.

So how did Stan manage to win back his mobility and make such a monumental recovery from the nasty fall that landed him a lengthy hospital stay, nursing two broken bones and severe bruising?

Son Dennis puts it down to an iron-clad determination and positive attitude that he says has driven his father his whole life.

“From day one, Dad had it in the back of his mind that he wanted to go home and be with mum again, and so he earned a bit of a reputation in the home for being Stan the Man with a Plan!” Dennis said.

As a former provider of first aid training to SCCQ Caloundra, Dennis said the aged care facility was the first place he thought of to provide the after-fall care  and rehabilitation the father of two and grandfather of three so desperately needed.

Supported by Personal Carer, SCCQ’s Madison Scobie (pictured with Stan) and the devoted nursing and allied health team at SCCQ Caloundra, Stan stuck to his custom—made exercise program in an effort to claw back his precious mobility. 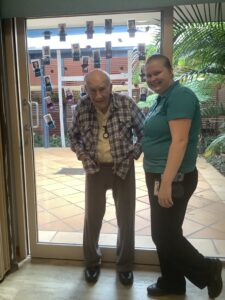 “Dad was always very active.  He worked as a piano tuner, was an active Rotarian, keen fisherman and up until about seven years ago, was still boating and travelling Australia in a motorhome,” Dennis said.

“He’s doing well now, and is focused on relearning where everything is at home and using a walking stick to overcome his shuffling,” Dennis said.

SCCQ Caloundra Residential Manager Karen Wilson said Stan was an inspiration to the entire team, who formed a guard of honour and cheered him on as he left the building with the ‘Theme from Rocky’ playing in the background.

When Stan first arrived, he was very frail and battered, but he became a legend, often spotted in the hallway in between rehab sessions, doing his sit-to-stand exercises and whatever it took to build his strength back up,” Karen recalls.

“He worked so hard and remained optimistic, always attending exercise classes, cycle classes and doing many laps of the buildings and gardens.”

“We are all so happy to see Stan’s hard work has paid off,” Karen said.

Stan was full of praise for the care team at Little Mountain, who he said were behind him every step of the way.

“I could never have done it without Physio Jay Taylor pushing me always to do a bit better. He had my trust and I had his to stay on the job. Actually, all the staff had faith in me and encouraged and helped me whenever they saw me having a go.”

“I owe my situation at home now to them but especially to Jay. I am still pushing myself at home to get back on top of things and Ces (my wife) says I have a much better appetite than I did over a year ago!” Stan said.

To learn more about our aged care homes, click here.